To easy to understand Human neurons to Artificial Neurons is a little bit tough but we conduct these neural networks by first trying to conclude the essential features of neurons and their internal connections in Artificial Intelligence. Then typically program to the computer to replicate these characteristics. However, because our knowledge of neurons is insufficient and our computing power is limited, our models are necessarily gross idealizations of real networks of neurons. 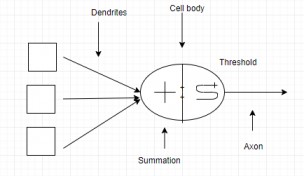 In an Artificial Intelligence, the firing rules is a most important concept in neural networks and account for their high adaptability. A firing rule verifies a neuron should fire for any input pattern. Firing rules understand to all the input patterns not only the ones on which the node was trained in Artificial neurons.

A simple firing rule can be performed by using the Hamming distance technique.

In the above example of the way the after applying Firing, a rule is to take the pattern 010. Firing rule differs from 000 in 1 element, from 001 in 2 elements, from 101 in 3 elements and from 111 in 2 elements. Therefore, the close the pattern is 000 which belongs in the 0 – taught set. It necessary that the neurons do not fire when the input is 001, on the other hand, is equal distance from two trained patterns that have different outputs and consequently the output stays undefined 0/1.

For more the difference between the two truth tables is called the generalization of the neuron. The firing rule gives the neuron a sense of similarity and authorizes it to respond sensibly to patterns not seen during training.