Apache Kafka is one of the distributed publisher-subscriber system or a distributed messaging system.


i.e. By accepting the message from different producers in a streaming fashion deliver the same messages to the distributed consumer.

Kafka is a message broker between Producer and Consumer with less time sending message.

The architecture of Apache Kafka see in the below diagram: 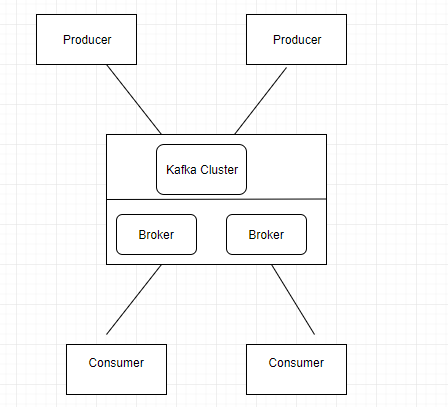 Producer: Producer is a process which will publish to message through Kafka broker.

Consumer: Consumer is a process which will consume or receives the message from Kafka broker.

Topic: The fields of the message will be inscribed in a topic.

Kafka Cluster: It will maintain the different brokers which are responsible for the smooth flow of the message passing between producers and consumers.

How to Installation Apache Kafka on Ubuntu simple steps:

Without Zookeeper, there is no Kafka. It means that first Install Zookeeper then will go with Kafka Installation.

Zookeeper is a centralized service for distributed systems to key, value store. It provides configurations for centralized systems.

Start the Kafka server using below commands in command prompt

How to create a topic in Kafka using below commands

Create a topic in Producer console:

Hello Apache Kafka is entering after your message in Consumer console